Quite a lot has changed in the last few months. I'd have preferred to do more incremental updates, but instead will just batch the progress all into one big update.

My cheap GoPlus Treadmill$ broke after only a bit more than a hundred miles, so I bought a used IMovr ThermoTread GT$ on Craigslist, with about 300 miles on it and in pristine condition. Since it's in such good condition and the summer has been hot here in Colorado, so far it has lived indoors. I've been loving it so far1, a much less constrained walking area and much smoother than the cheap treadmill.

My employer kindly purchased equipment for working from home. While I contemplated figuring out some weird ergonomic stuff to get, unfortunately most of the eccentric options I was interested in, like the Varier Gravity Balans or the Humanscale Float desk all fell outside the bounds of both budget and reasonableness. So, instead, I ended up with the following setup:

A variety of postures

This setup supports a variety of postures!

One very nice thing about the QOR360 chair is that there is an option to not have caster feet, and the base fits perfectly within the width of the treadmill belt, so I can put it directly on top. Similarly, the Focal Mogo Stool$ I use for leaning can be used right on top of the treadmill, so I never need to move the treadmill.

You might have noticed something a little strange going on in this picture – there's a mug suspended on the right and a water bottle on the left! The idea is that if your drink is suspended by a rope, accidentally bumping it usually never spills it. It also frees up some desk space!

On the right, as usual for suspending lightweight things indoors, I am using adjustable tie-downs$ with adhesive hangers$. The adjustable part of the tie-down can then hook directly around the loop built into my combo coffee mug / french press$. It's made by GSI Outdoors, and so is intended for camping and such, but I use it almost every day. I like the convenience of just having one thing to clean, and the built in suspension loop is great for this purpose.

On the left, I am using a ChicoBag Bottle Sling$. I particularly got this because it fits 2 liter bottles, which I use for homemade seltzer water. It also nicely fits my 40oz Hydro Flask$.

I put in a silly amount of time organizing the cables. Here's what it looked like before:

What a mess! Here are some pics after organizing:

Granted, no longer having the speakers on the desk reduced the number of cables a bit. The "before" pictures were taken a few months ago, as it took me a while to get around to putting up this update.

And here are some pics of the underside, in case you were curious:

Today I was doing some standing computing (as described in the standing keyboard section of the deskless wfh post), when I realized I wanted to be able to take quick inversion breaks (handstands, headstands). Doing these inversions is impeded because I needed to detach my keyboard. Two solutions occurred to me:

Here are some closeups on how it's attached:

The same can be done suspending it from branches / even twigs, just using the adjustable tie-downs$:

So far I'm liking this a lot! I think there are still some advantages over a stationary mount, because the keyboard still has some movement freedom – I can move side to side / turn a bit. This movement freedom is not quite as much as suspension from pants, but there is the notable benefit that I can immediately walk away from the computer without having a keyboard attached to me!

Synopsis: I built some variable angle polarizer glasses based on camera optics!

I found a rather nice spot under the deck for my Dutchware Chameleon backpacking hammock:

You might notice that there are some hooks hanging down. These are for suspending my laptop screen above my head, for ergonomic supine computing! These hooks are adjustable tie-downs$, attached via adhesive hangers$. The nice thing about these adhesive hangers is that they can be removed without damaging the surface.

So, this is very similar to the approach of suspending from zip-ties / wire as described in the "Laptop Ceiling Suspension" post. However, this was relatively unstable because the front of the body ended up resting on the ridgeline. I discovered that putting the hooks through the zip ties and hooking to the ridgeline added some nice stabilization:

I realize it might be hard to visualize how this works. Perhaps I will post some pictures of this hammock setup in use at some point. For now, here's a picture from the "Tree based Computing" post: 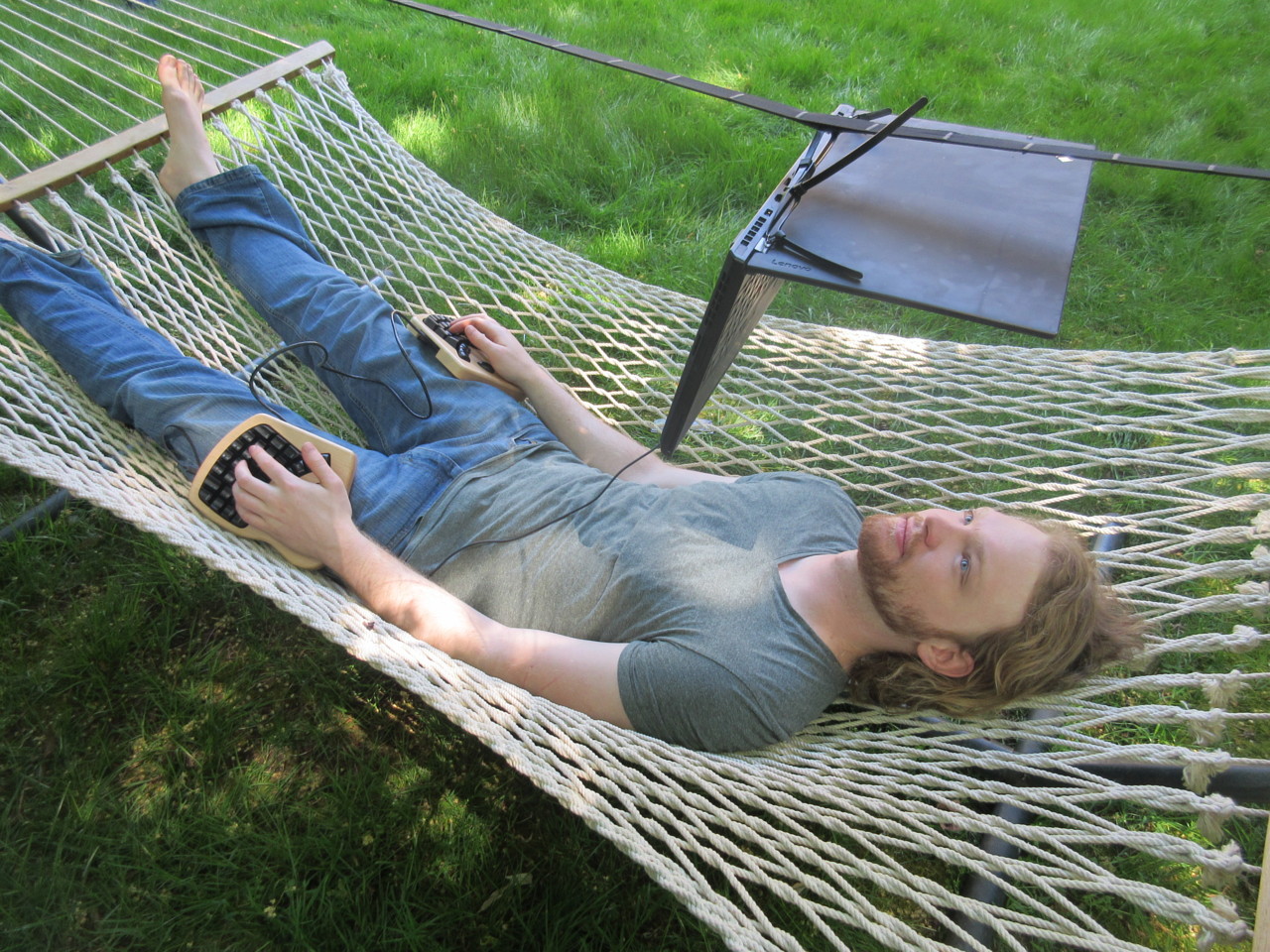 Synopsis: A few different ideas for comfortably working from home, without a desk.

Synopsis: A portable and ergonomic way to use your computer in nature.

Synopsis: Comfortable computer use while laying down, dealing with back pain. Hammocks!

Synopsis: How to use a laptop on an airline flight with decent ergonomics.